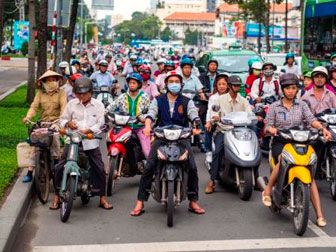 A recent trip to Southeast Asia left me inspired by the enormous potential of the VIP countries.
Vietnam, Indonesia, and Philippines appreciate the attention, as multinationals move beyond BRIC fascination and frustration to these rising young economic stars. Expansion is fueled by new purchasing power associated with the transition from rural agrarian lifestyles to urban centers focused on services and industrial production. It is easy to project a bright future for the VIP’s , with half their growing populations under the age of 25.

VIP Facts
Total VIP population exceeds 450 million people larger than Western Europe or the USA.
GDP growth averaged 5-7 % the last several years, surpassed only by China and India. Per capita GDP is low, hovering around $5,000.Unemployment rates are 6 % or lower and inflation remains at manageable levels. Boston Consulting Group counts Indonesia’s middle class as 74 million people and predicts that it will nearly double to 140 million by 2020. All VIP countries have suffered through years of political turbulence. Today, these countries enjoy increased political stability , although they share the usual risk factors associated with emerging markets.

Indonesia: # 4
Give yourself an “A” in world geography if you knew that Indonesia is the world’s fourth largest country with a population of 251 million people. Indonesia consists of 17,508 islands hugging the equator. The new urbanization resulted in more than 12 cities with populations of 1 million or more, including Jakarta’s 10 million inhabitants. International brands must navigate Indonesia’s lengthy registration and frequently changing labeling requirements before gaining space on shelves of the 1,000 supermarkets. Foodservice represents an important entry channel due to the rapid construction of five star hotels and the three million tourists lured by the mystique of Bali.

Philippines: 106 Million People
Population surged 31 % since 2000, with 25 million “future consumers” born since the turn of the century. Philippines maintains close ties with the USA with English is one of the two official languages. Strong acceptance of  “Made in the USA” products will lead to over 1 Billion in sales for USA exporters to the Philippines in 2013. Per capita gdp is modest at $4,300 . 11 million Filipinos live abroad, primarily in the Middle East and USA . These expatriates boost local spending power through transfers to their families. Market entry for international brands is fairly simple, with “stickering” a common practice. Modern supermarkets such as Robinsons,Rustan’s , and SM serve as good showcases for international brands.

Vietnam: A New Day
Many export managers were born in the Vietnam war era. In the 70’s, the west lost the conflict for the political heart of the Country. Today, we are winning the battle for the wallets of Vietnams increasingly affluent 93 million people. In reality, the new middle class of  Vietnam totals about 20 million people which is destined to double in the next 15 years. A May visit to Ho Chi Minh City ( Saigon) revealed a bustling market , brimming with new construction activity,hot deals, and consumer marketing activity. The shelves of Annam’s four Gourmet Markets are bursting with global brands from everywhere, including Barilla and Ponti in Italy , Walkers Shortbread from the UK to McCormick and Pepperidge Farm two USA favorites.

Thailand/Singapore Too
Thailand warrants consideration although has not reached VIP status. Thailand’s 66 million population is boosted by an estimated 24 million tourist arrivals in 2013. GDP per capita at $10,000 is one of the highest in Southeast Asia, with unemployment virtually non-existent. Despite these conditions, the Thai economy actually contracted by 2.2 % in the first quarter due to softness in exports driven by the appreciation of their currency. Singapore is a wealthy island nation of 5.5 million people. Per capita GDP is $60,900 , ranked number 7 in the world. Singapore maintains one of the world’s largest ports and is viewed as a strategic trading hub of Asia.  International brands fare well in Singapore, as most products are imported, with few locally produced brands. This creates an equitable pricing environment. Singapore hosts many expatriates who appreciate their favorite brands and can afford to purchase them. Export Solutions frequently recommends Singapore entry to supplement VIP countries , as Singapore sales may outpace  VIP’s in the short term.

Route to Market Entry
Distributors are the primary route to market in all VIP countries. Manufacturers are investing in brand building and product development with less focus on creating large subsidiaries. Global giants may have small internal sales teams to call on the fast growing supermarket channel. These same companies maintain extensive distributor networks to service the hundreds of thousands of small shops. All other companies hire distributors to build their brands. Distributors range from large companies with 1,000’s of employees and 10 or more warehouse’s to small niche entrepreneurs. As with all countries, larger distributors seek power brands, supported by marketing investment. Small and Mid size distributors are more entrepreneurial, willing to pioneer a brand with good long term potential. Export Solutions database covers at least 50 distributors of all sizes in each VIP country.

Some brands elect to begin with focus on the Foodservice channel. Five Star hotel construction is skyrocketing. Modern restaurants featuring Italian,American, and French food are sprouting up everywhere. Mid priced international chains are also appearing with greater frequency. The upscale Foodservice segment allows you to gain visibility in high profile outlets popular with upper income consumers. This supplies traction with consumers with higher discretionary income who may be familiar with your brand from their travels abroad. Ultimately, brands need to seek placement at strategic supermarkets and hypermarkets in the capitals, prior to venturing out to tier two cities, with lower income consumers accustomed to visiting small neighborhood shops.

Export Solutions Can Help !
Export Solutions recently completed several distributor identification projects in Asia. Export Solutions acts as a consultant, serving as a “helper” to busy export managers. We provide dedicated attention to screen candidates, arrange distributor meetings, and participate in the partner assessment process. Normally, projects take ninety days from project brief to distributor selection, including at least three local interviews with qualified candidates. Distributors are anxious to cooperate with Export Solutions as we are viewed as an important new business pipeline through our database and other activities. We are able to leverage our visibility with leading distributors to gain serious consideration for our clients new business projects. Looking to expand into Asia and the VIP countries ? Contact us at (001)-404-255-8387 or gseminara@exportsolutions.com